Where’s the Beef As Demand Increases for Meat Alternatives?

In 1984, seeking to raise brand awareness and gain a competitive advantage against larger, more established fast-food chains like McDonald’s and Burger King, Wendy’s launched what would soon become an iconic advertising campaign using the catchphrase “Where’s the Beef?”

(If you’re too young to know it or  need a refresher, click here to watch the TV spots.)

The campaign, featuring the wonderfully curmudgeonly Clara Peller, focused on competitors’ big bun and puny patty, compared to Wendy’s comparatively larger burger. The campaign was a hit, and the slogan remains part of our cultural lexicon today.

Interestingly, Wendy’s could easily re-launch the same campaign today, but with a completely different focus. As more consumers try – and in some cases switch to – plant-based meat alternatives, fast-food chains are getting on board. Most of the major fast-food outlets now offer at least one plant-based alternative to their traditional meat-based menu. Even Wendy’s hopped on the trend with their Plantiful™ plant-based patty, though that fell off the menu due to lagging uptake.

So, how is this playing out down on the farm? Are Canada’s livestock producers feeling the heat? Are they concerned that plant-based meat alternatives could become mainstream, reducing their incomes and perhaps displacing their livelihoods down the line? The answer, at least to this point, is — not so much.

To farmers, food is food, however it’s grown

Crystal Mackay, founder and CEO at Loft32 and former president of the Canadian Centre for Food Integrity, notes that many livestock producers simply view plant-based protein as another competitor for a share of the consumer food dollar. And in many cases, beef protein and plants/plant protein are actually quite complementary.

For example, Mushrooms Canada and Beef Farmers of Ontario are partnering on the unique Blend and Extend initiative, extolling the benefits of mushroom and beef blend-ability. According to Mackay, most livestock producers recognize that meat and vegetables go well together; the emergence of further processed plant protein products is more or less just an extension of this reality. 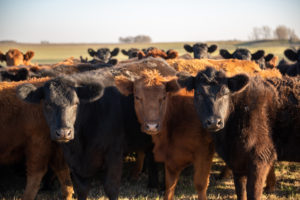 Amie Peck, stakeholder engagement manager for the Canadian Cattlemen’s Association, adds that over 60 percent of Canadian beef producers run mixed beef and crop enterprises. As demand for plant-based products rises, many of these producers benefit from that increase in demand. And there’s an environmental angle too; on mixed crop/livestock operations, if crops are damaged due to weather or pests or are unfit for human consumption in any way, they can often be fed to livestock rather than going to waste or landfill. (For more on curbing food waste on the farm, read this article from last month’s Nourish Report.)

Peck notes, “Beef and plants are completely compatible, both on the plate in terms of nutrition, and also in terms of production.” This point is re-iterated by Jill Harvie, thought leader and beef producer from Alberta.

The bottom line for beef and other livestock producers is that the emergence and growth of plant-based proteins is something of a “nothingburger.” Alternative and plant-based protein sources occupy a tiny percentage of retail meat market share, although, Peck told me, it is steadily growing. Furthermore, Canadians show a continuing and strong affinity for beef, with demand spiking early during the COVID-19 lockdowns and maintaining solid levels throughout the pandemic.

For now, the answer to the question of Where’s the Beef is: “where it’s always been.” In the grocery cart, on the grill, and on the plates of Canadian consumers!

P.S. A bit of personal perspective: as Father’s Day approaches, I’ve been thinking about my dad and his journey (he passed away in 1990). When he, along with his parents, four brothers, and grandmother, emigrated to Canada in 1939, they started with nothing. The farm they had purchased, which was to have come with a barnful of hogs, was empty when they arrived; they literally had nothing but the soil beneath their boots. Fights over food at the dinner table were common, and from what I’ve heard could turn quite nasty..

To be able to have a debate over the merits of plant-based versus livestock-based proteins is a blessing. While poverty and hunger remain present in Canada, and something we need to continue to focus on and address, for most Canadians, knowing where their next meal is coming from is not a daily challenge. For this, we can all be grateful.