Cooking by Degrees, a 16-story series published in the nationwide media network of The Toronto Star, was the result of an innovative partnership that linked like-minded partners right up the agriculture and food value chain. The project took coordinating 16 university chefs through the Canadian College and University Food Service Association, multiple beef producers through the Canadian Roundtable for Sustainable Beef, Canada Beef, and a veteran ag journalist to do the interviews and craft the stories. 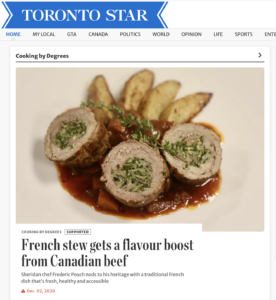 One of the articles in the Cooking by Degrees series.

The Cooking by Degrees project was awarded first place in the News, feature article or persuasive writing – trade media category at Best of NAMA (National Agri-Marketing Association) 2021 Region 6. With the win, the project moves on to the national awards level at NAMA.

“The quality of on-campus food service has become a major feature in recruiting students everywhere,” says Roberts. “College and university cuisine represents a pivotal introduction to Canadian food and has a signiﬁcant but seldom-considered impact on the country’s agriculture sector.”

Each of the stories in the series featured a talented executive chef from a university or college in Canada with one of their recipes featuring a more affordable cut of beef. Roberts also tied the story to a Canadian beef farmer to share their sustainability story.

“The project is unique in many ways, intersecting agriculture and food, culinary expertise, academia and sustainability,” says Rhett Hawkins, president of Kahntact Marketing.

“This project gave high-profile exposure to non-traditional audiences for beef producers,” says Len Kahn, founder of Kahntact. “Through the Star’s nationwide media network, the stories of sustainable beef production had a huge audience.”

Data reported by the Toronto Star show that people spend more time reading these articles than other comparable content. People read the articles to the end and then look for other related articles. The stories are still getting traffic and showing up in search results a year and a half later.

All partners have seen high engagement with related Facebook posts. The article receiving the most engagement was “Brisket as good on Tuesday as it was on Sunday,” featuring Christopher Ennew, executive chef at Trent University, and Alberta ranchers Jill and Kelly Burkhardt.

“From coast to coast, the participating producers discussed how they and their families produce beef and the wide variety of practices that defines them as sustainable personally,” says Andrea White, director, marketing and stakeholder relations at CRSB. “We foster continuous improvement from an environmental and social responsibility perspective across the Canadian beef value chain. Putting a face to beef production helped us explain the sustainability measures our producers take on their farms and ranches. And Cooking by Degrees was a wonderful ﬁrst-time introduction to beef production for many Toronto Star readers.”